Reading for a wonderful wade fishing adventure? Grab your waders and cast net and head on down to the Forgotten Coast. Franklin County offers some of the most productive wade fishing and cast net fishing in all of the Sunshine State!

Thanks to the unique topography of the Apalachicola River and Bay systems, combined with our area’s prime location on the Gulf coast, Franklin County is home to diverse, highly productive marine habitats. 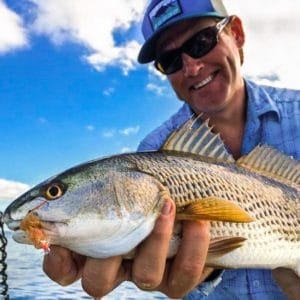 More than 100 species of fish make their home in the fertile Apalachicola Bay. These abundant fish gather among the grassy flats, channels, oyster bars and sand bars. Wade out into the bay to hook into redfish, speckled trout, flounder, sheepshead and black drum year-round. Between March and November, Spanish mackerel, pompano, tripletail, bluefish, ladyfish and sharks are also abundant in the bay.

Off the coast of Carrabelle, the St. George Sound is home to some of the most bountiful grass flats in all of Florida. These grass flats are loaded with a myriad of marine life, including shrimp, redfish, trout and grouper.

Further east, off Alligator Point near Bald Point State Park, the Ochlockonee Bay and Apalachee Bay also are teaming with a wide variety of fish species, from speckled trout, redfish and tarpon to sea bass, sheepshead and flounder. Heaps of fish gather around Apalachee Bay's lush grass flats as well as around structures in Ochlockonee Bay.

Not only is the Forgotten Coast home to the most pristine, breathtaking beaches in the Sunshine State; but our fertile waters boast some of the best wade fishing in Florida.

Take a trip to St. George Island or Alligator Point and wade out into the Gulf of Mexico. In the prolific Gulf waters around the Forgotten Coast, you can catch whiting, flounder and redfish year-round. In the warmer months (when the water is 70 degrees or warmer), you may hook into speckled trout, pompano, bluefish, Spanish mackerel and sharks. Cast net fishing is also extremely popular in these areas, particularly if you’re looking to snag some mullet.