You are here: Home > Alligator Point

Alligator Point boasts some of the most pristine beaches in Florida along with unsurpassed fishing and wildlife viewing. Known as simply “The Point” by locals, this coastal community is situated between the Gulf of Mexico and Alligator Harbor—an estuary known for clam harvesting.

Things to Do in Alligator Point, Florida

This cozy coastal community is the ultimate getaway for beachgoers seeking tranquility. The absence of noise and glaring lights allows for relaxation, contemplation and exquisite stargazing. While it is certainly a quiet retreat, there are plenty of things to do in Alligator Point. From biking, hiking and canoeing to birding, kayaking and swimming, Alligator Point offers countless activities for nature lovers and outdoorsy visitors.

Fabulous Fishing
Alligator Point is renowned as a hot spot for both inshore and offshore fishing. The community’s protected bay, Alligator Harbor Aquatic Preserve, encompasses a whopping 14,366 acres. This massive water sanctuary serves as a nursery for numerous game fish species, such as grouper, snapper, cobia, tarpon and redfish.

Alligator Point also features a full-service marina offering fishing charters. There are several public access areas along the beach and two boat ramps on the bay side. Whether you cast a rod from the beach, a kayak or boat, you’re certain to hook into something at Alligator Point.

Wondrous Wildlife Viewing
Home to sea oat-covered sand dunes, untouched marsh habitats, fresh water rivers and dense pine forests, Alligator Point is teeming with wildlife from end to end. The Point is bordered on one side by Bald Point State Park, a 5,000-acre protected wildlife area. This prolific park is nationally renowned as bi-annual stopover for migratory birds and butterflies.

The nearby St. Marks Wildlife Refuge is another popular destination for nature lovers. The oldest refuge in the Sunshine State, St. Marks was established in 1931 to provide a wintering habitat for migrating birds.

If you want to enjoy uncrowded beaches, fabulous fishing and wildlife viewing, Alligator Point Florida is the place for you.

You are invited to relax and stay awhile in Alligator Point...

From a quaint beach cottage to a luxurious beachfront villa, Alligator Point
offers a variety of places to stay. All accommodations in Franklin County, Florida

Get Special Offers on Accommodations 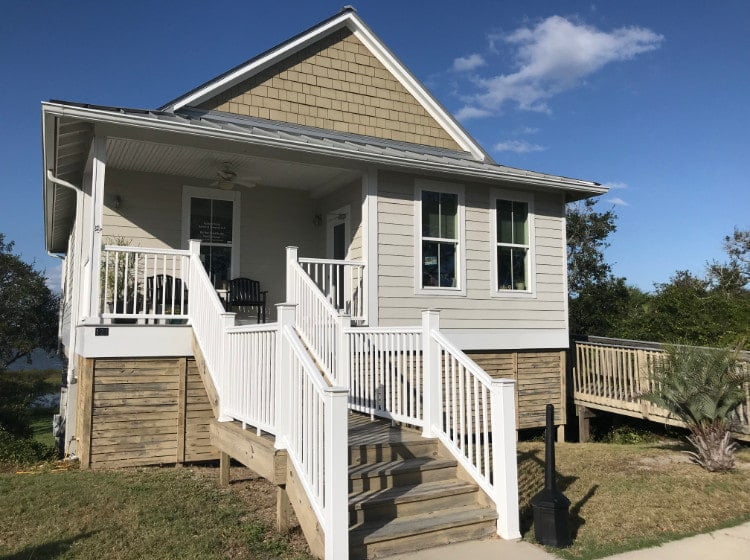 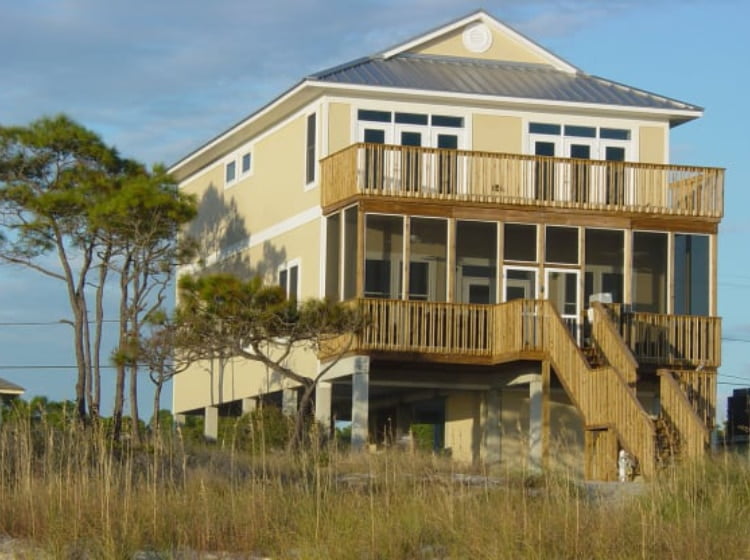 Discover the Forgotten Coast's authentic, Old Florida charm at more than 100 annual events and
festivals, that highlight our natural resources, culture and history. Click here to see all events 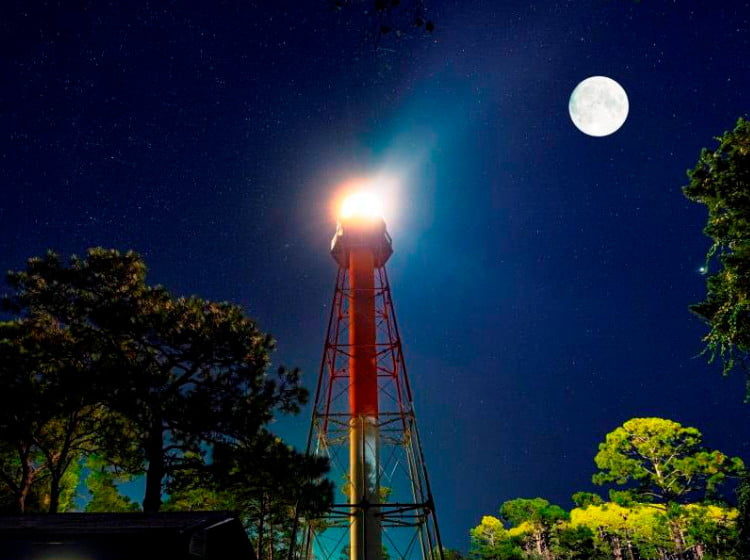 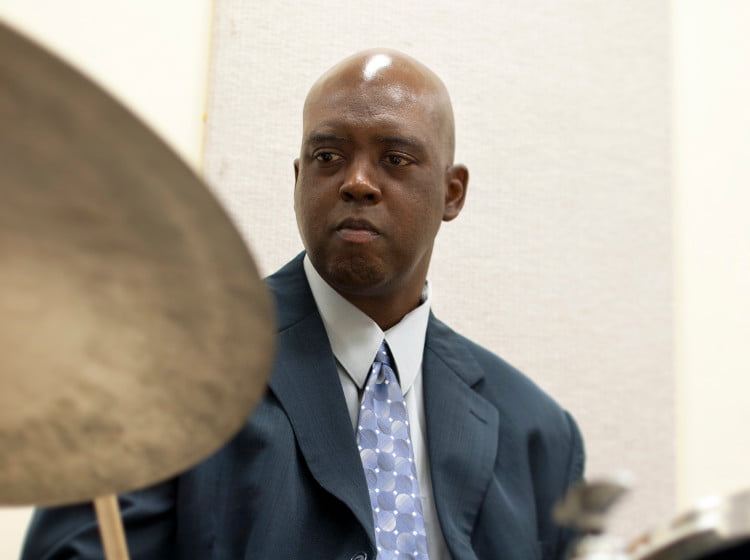 Alligator Point is an an untouched coastal paradise nestled at the easternmost corner of Franklin County. This sparsely populated, rural beach community encompasses eight miles of unspoiled coastline along a narrow beach peninsula.

Alligator Point features a variety of vacation rental options on both the gulf and bay side of the peninsula. Accommodations range from beachfront vacation homes to modest cottages.

What is there to do in Alligator Point?
Although Alligator Point is a peaceful, rural beach destination, there are many things to see and do in this area. From biking, hiking and shelling to birding, paddling and relaxing on the beach, Alligator Point offers heaps of activities for visitors. Renowned as a hot spot for fishing, Alligator Point features a full-service marina offering inshore and offshore charters. The town also includes several public access areas along the beach and two boat ramps on the bay side. Whether you cast a rod from the beach, a kayak or boat, you’re certain to hook into something at Alligator Point.

Are there alligators at Alligator Point Florida?
Alligator Point is teaming with wildlife, including black bears, white tail deer, bobcats, foxes, coyotes, otters, a variety of birds, and yes—a few alligators. However, this is not the reason for the town’s name. It’s called Alligator Point because the area is shaped like an alligator’s tail.

Will the alligators in Alligator Point attack people?
While there are a handful of alligators in Alligator Point, they will not attack humans unless provoked. Alligator attacks are extremely rare. You are more likely to get struck by lightning or win the lottery than to be seriously injured by an alligator. Alligators target prey animals that are much smaller than people, including fish, birds, other reptiles and small mammals. They are generally afraid of humans.

Even so, there are a few alligator safety tips you should keep in mind when visiting any area in Florida. First and foremost, never feed a wild alligator. If you see an alligator in the wild, give it some space. Do not disturb alligator nests or baby alligators. Avoid swimming in areas marked as an alligator habitat, and never let pets or children wade or play in or near these waters. Steer clear of heavy vegetation near the water’s edge as alligators generally bask in these spots.

If you follow these simple rules, there is no reason to fear our local alligators! We encourage visitors to watch and photograph alligators from a safe distance. It can be an unforgettable experience to observe these fascinating creatures.

Remember, if a shell still has a living creature inside of it, leave it alone. This also applies to living starfish, sand dollars and sea urchins.

What is Alligator Point’s water clarity?
The water clarity varies depending on the season, tides and weather conditions. In the drier months of the winter, the water can be very clear. In the summer, Alligator Point water is greenish to brown in color with about two to four feet of visibility. The area’s water color is also influenced by the nearby Ochlockonee River. While Alligator Point may not have the most crystal-clear water, they are the most tranquil and unspoiled beaches in all of the Panhandle.