You are here: Home / Things to See & Do / Geocaching 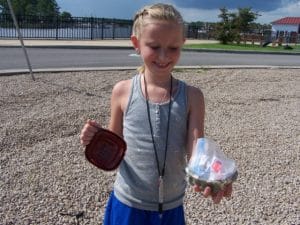 Planning to visit one of Franklin County’s state parks? Make sure you bring your hiking shoes, your smart phone and a sense of adventure. The Bald Point State Park on Alligator Point and St. George Island State Park are participants in Operation Recreation GeoTour - a high-tech treasure hunt that requires players to use a smartphone or GPS device to find hidden treasures. The State Park GeoTour stretches from Pensacola to Key West and currently includes 64 state parks and state trails. Cachers can visit the GeoTours webpage to view each one of the 69 caches hidden within the parks.

In addition to the two state parks, other areas in Franklin County feature geocaching opportunities. There are an estimated more 200+ geocache sites dotting the coast between Alligator Point and the western edge of Franklin County.

Geocaching, which combines the terms “geographical” and “cache,” is an outdoor adventure that sends seekers on a treasure hunt for a containers of trinkets and prizes. Participants use a Global Positioning System receiver (GPSr) or other navigational techniques to hide and seek containers called “geocaches” or “caches.” A typical cache is a waterproof container containing a logbook.

In Franklin County, local enthusiasts report that the size of the caches range from “nanos”, which can be smaller than a fingertip, to ammo cans.

Caches are rated by the difficulty level in locating them and also in terrain difficulty in accessing them. Difficulty ratings range from 1 to 5 ­ "1" is a geocache out in the open which can be accessed by wheelchair and "5" which requires special tools, knowledge and physical endurance to retrieve the cache. Each cache is identified by a waypoint designation which indicates the serial number assigned to the cache by the official geocache registry at Groundspeak. Click here for a list of all Franklin County, Florida geocaches.

A Sampling of Franklin County Geocaches