The hot times of September 1 - October 15 and April 1- May 10 are famous in birding communities for the neotropical migrants found especially in the migrant trap at the Youth Camp area of the park. Ornithologist from several universities make the yearly trek to view Indigo Buntings, Orchard Orioles, Painted Buntings, Scarlet Tanagers, Rose-breasted Grosbeaks, Prairie Warblers and Summer Tanagers to name a few.

2. Wright's Lake Recreational Area, Apalachicola National Forest.
Located on Highway 65 twenty miles north of Highway 98. This vast national forest is home to countless birds and is one of the crown jewels of Franklin County.

One of the best places in this forest to add some uncommon species to your list is the area around Brickyard Road and Wright's Lake. Signage on Highway 65 directs you to the Wright's Lake Recreational area. Here the hot time of May 1 - July 15 is peak for the longleaf pine specialist like Bachman's Sparrow and the endangered Red-cockaded Woodpecker.

3. Bald Point State Park.
Located on the far eastern side of Franklin County: 146 Box Cut Road, Alligator Point, Florida 32346 (850) 349-9146 Bordering on the Ochlocknee River to the north and the gulf of Mexico on the east this park offers a large array of habitats: Freshwater Swamp, Freshwater Marsh/Wetlands, Pines, Lake/Pond/Impoundment, Scrub, Hardwoods/Mixed Forest, Marine/Bay, Salt Marsh, Beach/Dune. Some of the best times are September 1 - October 15 and April1 - May 10. Spot neotropical migrants like American Redstart, Bobolink, Black-and-white Warbler and Yellow-throated Vireo. Wintering species may include Hooded Merganser, Bonaparte's Gull and Common Loon. 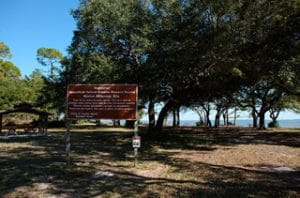 offers bay, salt marsh and oak canopy habitats. Spring and fall migrants include the neotropical migrants and this spot is dependable for Indigo Bunting, Blue Grosbeak, Great-crested Flycatcher, Least Flycatcher, Yellow-rumped warbler and Rose-breasted Grosbeaks especially in the spring when the oaks are in bloom. The shoreline and flats feature Solitary Sandpiper (during fall/spring migration), Snowy Egrets, Great Egrets and Great Blue Herons most times of the year. Water birds like the Red-breasted Merganser and Bufflehead are common in the winter months.

5. City of Apalachicola.
Almost the entire City of Apalachicola is a birder's paradise. Here the old-growth pines and oaks have been preserved and it is an oasis for birds in the desert of slash pine monoculture. In addition many residents maintain feeders and watering stations and plant native vegetation that nourished the birds.

A walk under the majestic oaks in the Historic District during April 1 - May 30 may reward you with Yellow-throated Warblers, Yellow-throated Warbler, Tufted Titmouse, Red-eyed Vireo and Baltimore Oriole. Walk the same scenic streets in the fall for nesting Bald Eagles, Red-shouldered Hawks, Red-tailed Hawks and Barred Owls.

6. Sand Beach Road observation tower.
Located in the Apalachicola River Wildlife and Environmental Area, at the end of Sand Beach Road at Highway 65 about five miles north of Highway 98. Signage on Hwy 65 directs you to the tower and boardwalk. Habitats include freshwater swamp, pines, hardwoods/mixed forest, marine/bay, salt marsh, mudflats.

This site will offer you beautiful views as well as good birding. The tower and boardwalk are at the conjunction of East Bay and Blount's Bay in the heart of the estuary environment. Along the shore line you may spot Clapper Rails although you will probably hear them more easily. Spotted Sandpiper and Willet feed in the shallows. Bald Eagles nest here and Osprey can be seen diving for fish from March through November. Migrating waterfowl pass through Blount's Bay including Blue-Winged Teal and Lesser Scaup.

A common treat here in spring and summer is the majestic Swallow-tailed Kite. In late fall great numbers of Tree Swallows can be seen feeding over the rich bay as they gather for their migration.

7. Old Carrabelle Beach.
Gulf Beach Road, just west of the City of Carrabelle. This is a large, beautiful birding site favored among local birders and beach walkers. A stroll 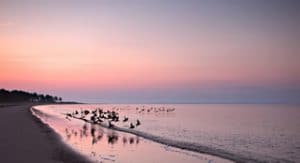 down the beach to the east leads you to an area of shallow oyster beds and fertile birding. Spring through fall is good for Black Skimmers, Ruddy Turnstone, Sanderling, Short-billed Dowitcher and Marbled Godwit. 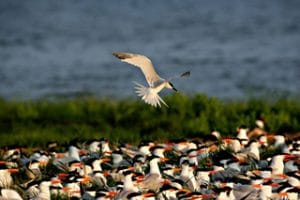 these structures will put you square in the middle of the bay habitat of an extraordinary number of species. Caspian Tern, Sandwich Terns, Forster's Tern, Royal Tern, Least Tern and Gull-billed Tern nest on the old causeway between the two piers and late spring and early summer they can be seen diving and bringing food to their growing offspring. This is one of the most important nesting areas on the Forgotten Coast. In the waters around the piers you may spot over-wintering waterfowl including Common Loon, Red-breasted Merganser, Bufflehead and Canvasback.

10. St. Vincent National Wildlife Refuge.
Located off the western-most shore of Franklin County, this large barrier island is a wonderful birder's adventure but probably best explored with a guide. There are five fresh-water lakes in the interior of the island which are best explored by kayak and are managed for waterfowl and a tremendous number of species can be found there including Wood Duck, American Wigeon, Pide-billed Grebes, Northern Shoveler, Hooded Merganser, American White Pelican, Double-crested Cormorant, Anhinga, Green Heron, White Ibis, Glossy Ibis, Roseate Spoonbill, Sora and Wood Stork.