For more than 110 million years, sea turtles—among the oldest creatures on earth—have thrived. In modern times, despite a host of natural predators to eggs and hatchlings, their prevailing and most critical threats come from mankind. In Franklin County, as in many sea turtle nesting areas nationwide, active efforts are under way to reverse this trend through community and visitor education, habitat and nesting research, and identification and monitoring of nests and hatchlings.

Six organizations, a combination of volunteer groups and state and national agencies, are jointly working in Franklin County to help ensure the safety and protection of sea turtles and their nests. Volunteer organizations include The St. George Island Volunteer Turtlers, who monitor 12 miles of beaches on St. George Island; The Alligator Point Turtle Patrol, which monitors six miles of beaches on Alligator Point; and The Dog Island Turtle Patrol, which monitors all beaches on Dog Island. State and Federal agencies currently monitoring beaches throughout the county include The Apalachicola National Estuarine Research Reserve, The U.S. Fish and Wildlife Service and The Florida Park Service.

According to Bruce Drye, the marine turtle permit holder for St. George Island and also the coordinator for the island’s volunteer turtler group, threatened loggerhead sea turtles are the primary species nesting in Franklin County, although both green turtles and leatherback turtles have nested in the area on rare occasions. Preferred nesting sites are the area’s sandy beaches along the barrier islands, but nests also can be found along sandy beach stretches of Apalachicola Bay and St. George Sound.

Though they hatch out at a dainty two inches long, adult loggerhead sea turtles are among the larger of the sea turtle species and weigh an average of 275 pounds. Distinctive features include a massive, block-like head and two claws on each of two flippers. These turtles don’t have teeth; however, powerful jaws enable them to crush and ingest their primary fare of clams, crabs and other armored sea animals.

“Sea turtles migrate between nesting areas and foraging areas, often traveling hundreds, even thousands of miles to reach a desired location. Some individual turtles that nest in Franklin County may travel as far as the coast of Central or South America to forage before returning to nest,” noted Drye. 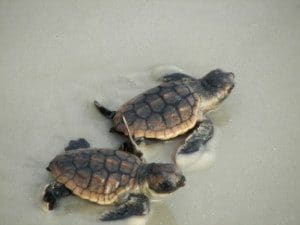 By the time females reach shore to nest, they are at peak energy levels for nesting, though their energy is coming from stored fat reserves. According to Drye, female sea turtles don’t eat during nesting season. This is necessary to allow their intestines to shrink so that the organs producing egg follicles can productively grow between 100 and 120 ping-pong-sized eggs.

Ideally, nests are laid in the upper area of the beach where the dunes and vegetation begin. If a nesting female is discouraged in her first attempt, primarily due to human interference such as artificial lighting or obstacles on the beach like coolers and lounge chairs, subsequent attempts on the same evening severely deplete her energy reserves, and nesting is jeopardized.  “That turtle may come ashore later, in a location that might not be as suitable as the first, or maybe lay her eggs closer to the water,” explains Drye.

The nesting period for loggerhead and green sea turtles begins in May, continuing through late August. Leatherback turtles begin nesting as early as March, and also continue through August.  With an average incubation period of 60 days, the nesting season runs through October 30th.

After a successful nest is laid, the process of identifying and monitoring new nests is lengthy and requires an ongoing, daily commitment during the eight-month nesting season. As described by Drye, “Every morning at dawn, volunteers of the St. George Island Volunteer Turtlers walk the beaches of St. George Island in search of nesting activity that may have occurred during the night. By the tracks left in the sand, the trained volunteers can determine what species of turtle came ashore and whether it nested or not.” 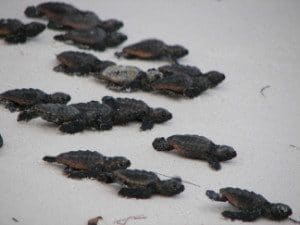 Drye continues, “After the volunteer locates the egg clutch by digging carefully in the sand, they will mark the nest for protection with? Do Not Disturb Sea Turtle Nest’ signs provided by the State of Florida. Every morning while looking for nesting activity, the volunteer will monitor each marked nest for signs of crab predation, surf over wash or inundation, human disturbance, or signs of the nest hatching or disorientation of hatchlings. After a nest hatches, the volunteer inventories the nest contents to determine hatchling success. By digging into the nest and removing the contents, hatched eggs can be separated from unhatched eggs, and a percentage determined.  Sometimes live hatchlings trapped in the nest are discovered and released at night,” explains Drye.

Sea turtle hatchlings most often emerge at night, and thus begin the next phase in their battle for survival.  Among their major predators are crabs, birds and mammals such as raccoons that forage along the beaches. Survival advantages for night hatchlings include avoidance of bird predators, and increased opportunities to reach the safety of deep water undetected by fish predators.

Drye adds that mankind has become the greatest threat to sea turtles, including hatchlings. A hatchling’s primary clue to locate the water—their only safe haven--is their visual detection of the light horizon where the sky meets the sea. For millions of years this natural process was undisturbed, but now, that has changed.

“We light our buildings along the nesting beaches and the lights disorient the hatchlings, causing them to crawl the wrong way and die,” Drye notes. “Hatchlings that crawl towards our lights are eaten by predators as well as die of exhaustion under homes and in streets,” he adds.

In their effort to educate beach visitors and locals alike to be better stewards of the nesting loggerheads and other sea turtles, Drye and other volunteer turtle monitoring and rescue groups make this recommendation: 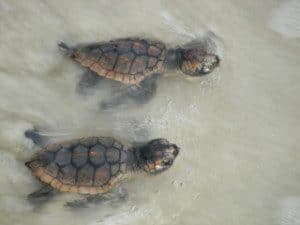 In addition to nest monitoring efforts by volunteer groups and government agencies, Franklin County also passed a lighting ordinance for marine turtle protection in 1998 to aid in the protection of sea turtles.

“This county-wide ordinance was intended to protect hatchling marine turtles from the adverse effects of artificial lighting, provide overall improvement in nesting habitat degraded by light pollution, and increase successful nesting activity and protection of hatchlings on the beaches of Franklin County,” notes Drye.

Additionally, shrimpers in Franklin County, and all shrimpers nationwide, are now required to use “TEDs,” or “turtle-excluder devices” that allow turtles who become accidentally trapped in shrimp nets to escape through a false door. Prior to enacting of this law in 1989, some 11,000 sea turtles died annually as a direct result of drowning while trapped in shrimp nets.

Current research statistics indicate that only one hatchling in 5,000 reaches adulthood. In Franklin County, the involved government agencies and dedicated volunteers will continue their commitment to increase these odds.