You are here: Home / Unforgettable – The Blog / See Something Different on the Forgotten Coast: Explore the Dwarf Cypress Forest of Tate’s Hell 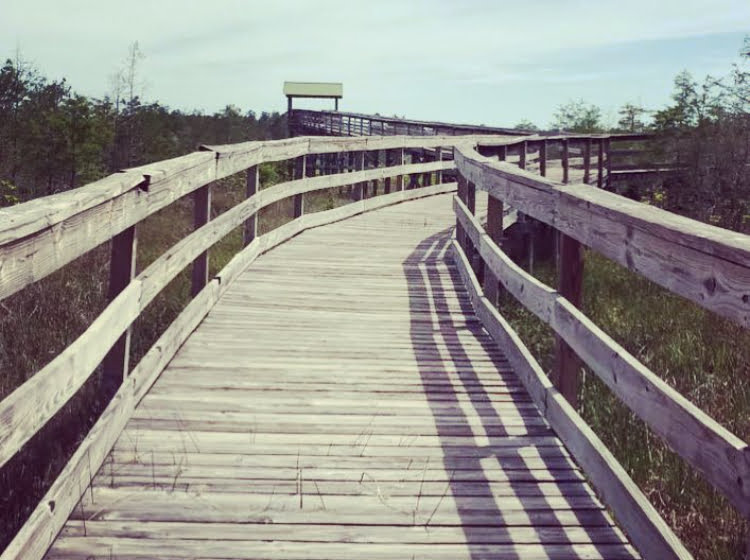 Tate’s Hell sounds like a place you should avoid. Local legend blessed this fascinating, wild forest with that name, but don’t let it scare you. This isolated area is worth the drive. A visit to the Dwarf Cypress Forest will make your trip to the Forgotten Coast complete.

Why would I want to drive out into Florida woods? The Dwarf Cypress Forest is beautiful and eerie, and the wildlife you might see are bucket-list-worthy. Most cypress trees are in the 50 to 80-foot range, but the Dwarf Cypress Forest in Tate’s Hell is a strange canopy of white cypress trees that range from 6 feet to 15 feet tall. The tree growth is stunted because of an underlying layer of clay and low-nutrient soil. Wild carnivorous plants, Florida black bears, bald eagles, red-cockaded woodpeckers, and venomous and non-venomous snakes call this forest home. If you don’t want to get too close to the wildlife, sticking to the Ralph G. Kendrick Boardwalk and Observation Tower should keep you at a safe distance.

And, what about the legend? The Legend of Tate’s Hell has been told and retold through the years. In 1875, local cattle farmer Cebe Tate set out with nothing but a gun and his dogs. He needed to find and kill an elusive panther that had been making a meal of his cattle. As soon as he reached the swamp, his dogs caught the panther’s scent and exploded in chase of the panther. In the commotion, Tate got stuck in the muck and the mud losing his gun and shoes. Tate wandered from there, stopping in the Dwarf Cypress stand to escape the bugs. In exhaustion, Tate dozed against the trees until a snake bite jolted him awake. In a panic, he ran off into the swamp. Tate emerged in a clearing near Carrabelle seven days later. He lived only long enough to say, “my name is Cebe Tate, and I just came through hell.”

Do you need directions? Follow Highway 98 to the Ralph G. Kendrick Boardwalk sign at John Allen Drive. Take John Allen Road for around 5 miles and follow the signs leading you to take a left onto Dry Bridge Road. Then another sign guides you to the parking area. Here, you will come upon the Ralph G. Kendrick Boardwalk. This long winding boardwalk takes you about a quarter of a mile into Tate’s Hell and the Dwarf Cypress Forest. You should allow at least half an hour to walk this boardwalk and climb the observation tower.

Tate’s Hell is a vital asset to our area. The forest creates a natural buffer for the Forgotten Coast, and it impedes development and surrounds us with miles of pristine native land. We are not only beautiful beaches, and we are not only phenomenal fishing. There is much to explore in Franklin County.