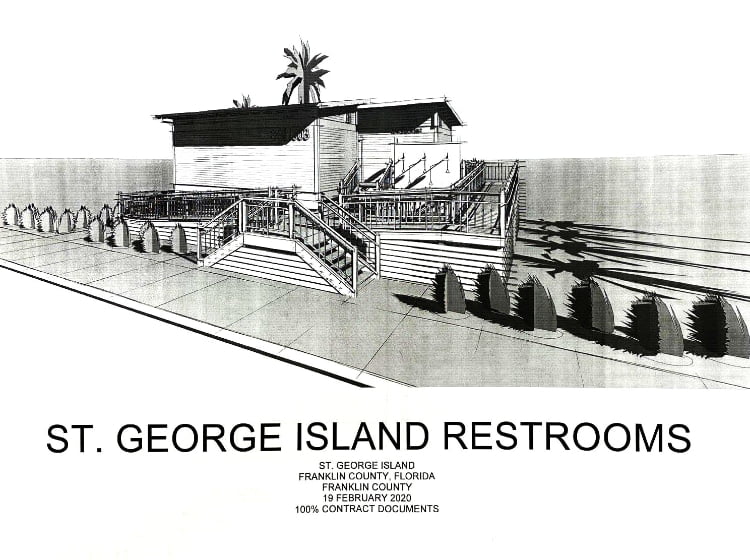 St. George Island will see new restroom facilities this fall thanks to funding from the Franklin County Tourist Development Council (TDC). The project, approved recently by the Franklin County Board of County Commissioners, was given the green light to go out for bid on Tuesday, June 2 after plans for the new facility were received and approved.

“We’re doing a great job at getting visitors to St. George Island but our 20-year old infrastructure needs to be expanded to accommodate a growing number of visitors to the area,” said Ricky Jones, Franklin County Commissioner and Chairman of the Franklin County TDC. According to Jones, the new facilities will be a welcome addition to the island. “The restrooms at the public beach park are the only public bathroom facilities in the entire business district on the island. On a busy weekend, we’ve seen very long lines of people waiting to use them,” he said.

According to TDC Director John Solomon, the TDC will incrementally fund the project out of its $1.4 million budget which by state statute restricts spending more than 10% annually on any beach park infrastructure project.

The St. George Island restroom project follows on the heels of other beach park and tourism-related infrastructure projects funded in recent years through bed tax funds administered by the TDC. Other TDC-funded projects have included restroom facility improvements at Carrabelle Beach, renovation of the Fort Coombs Armory in Apalachicola and the Olan Buddy Ward Seafood Landing Park which features boat landing facilities, a picnic area and maritime exhibit.

« Ready for a Change in Scenery? Enter to Win Our Come to the Coast Outdoor Getaway!
Top 3 Thrilling Outdoor Adventures on Florida’s Forgotten Coast »