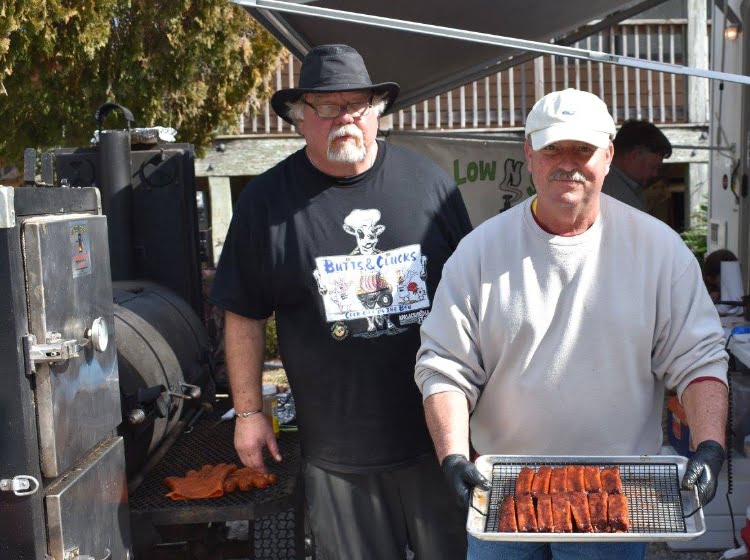 If you’re a fan of delicious food, gorgeous scenery and tons of fun, you don’t want to miss The Butts & Clucks Cook-Off on the Bay! This year’s event will be held Thursday, Friday and Saturday, January 23rd, 24th and 25th in Apalachicola’s beautiful Battery Park.

Sanctioned by the Florida BBQ Association, The Butts & Clucks Cook-Off on the Bay is organized by the Apalachicola Chamber of Commerce. This awesome annual event is now officially the 2020 Florida BBQ Association State Championship. With more than $15,000 in prizes to be awarded, the winner of Butts & Clucks will move on to the Jack Daniels Championship.

Like all sanctioned events in the barbecue competition world, The Butts & Clucks Cook-Off on the Bay will draw multiple teams from all over Florida and across the Southeast. For the 2020 event, teams have signed up from Orlando, North Carolina, Jacksonville and Americus, Georgia. These teams will compete in four meat categories: Chicken, Ribs, Pork Butt and Brisket.

The Butts & Clucks Cook-Off on the Bay will feature loads of cool contests and family-friendly activities, including:

On Thursday, January 23rd, a Judging Seminar will be held for anyone interested in being a state certified BBQ Judge. The same day, there will also be a Shut Up and Shuck party for all competing teams and the judges.

Talk about a finger-licking good contest! The BBQ Sauce Competition will be judged in the evening on Friday, January 24th.

During this mouthwatering mystery competition, entrants will receive a sealed box to be revealed at 2 pm on Friday, January 24th. They will then have two hours to cook a dish that includes the main ingredients in the box. This event will be judged by local chefs in front of the competitors at 4 pm on Friday.

The Butts & Clucks Cook-Off on the Bay will be rocking and rolling on Saturday, January 25th. Check out talented musical acts onstage in middle of Battery Park from 3:30 until 5 pm.

This year’s event will feature a variety of vendors serving up BBQ and other scrumptious options all weekend long.

Of course, you’ll need some merch to prove you were here for The Butts & Clucks Cook-Off on the Bay. Swing by the T-shirt trailer on Friday and Saturday to purchase your event tees and aprons.

Competing BBQ teams will also enter this People’s Choice category. This contest will be judged by…YOU! Anyone is welcome to purchase a VIP ticket and judge this tasty event. Buy your VIP ticket at the t-shirt booth to gain access to access to the People’s Choice tent on Saturday, January 25th. These VIP passes will be limited to 60 tickets and can be purchased on Friday the 24th and Saturday the 25th. From 2:15 to 3:45 pm, People’s Choice judges will have a chance to try every competitor’s pulled pork and vote for their favorite.

On Saturday, January 25th, don’t miss this delightful Deviled Egg contest, also known as “The Cluck that Came from the Butt Contest.” This is a fun way to get everyone involved in the Butts & Clucks event. Anyone and everyone is welcome to sign up for this “clucky” contest, and the entry fee is only $5. Deviled eggs must be turned in at 4 pm on Saturday, January 25th at the Community Center in Battery Park. If you’re interested in competing, visit www.ButtsandClucks.com for more information.

Ready for some fun in the sun this January? Come on down to Florida’s Forgotten Coast to take part in this exciting barbecue battle! Book your stay today!

« Christmas on the Coast: 4 Fun Things to Do During Your Holiday Visit
Calling All Art, Music & Theatre Fans: Enter to Win Our 2020 Coastal Culture Getaway! »