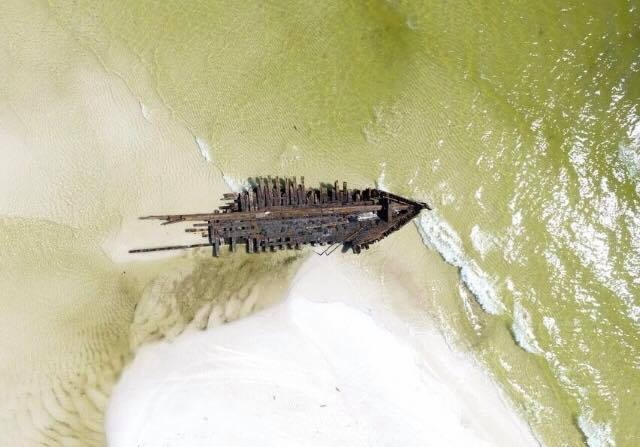 It seems as if Hurricane Michael left behind an apology gift for Florida’s Forgotten Coast. Michael’s storm surge dredged up a handful of 19th Century ships that washed ashore Dog Island during the 1899 Carrabelle Hurricane. These old wooden ships now sit in plain view near the west end of Dog Island, which is located just 3.5 miles offshore from Carrabelle.

Nearly 120 years ago, the Carrabelle Hurricane crossed over the Florida Keys into the Gulf of Mexico, where it strengthened into a Category 2 storm. The powerful hurricane caused 15 ships to wreck and wash ashore the Franklin County barrier island.

For more than a century, the well-documented shipwrecks have remained mostly stationary, buried in the sand along Dog Island. Over the years, parts of the site have become exposed due to shifting tides—but they have never been in full view as they are today. In 1999, archeologists Chuck Meide, James A. McClean and Edward Wiser surveyed two of these ships and compiled research about the 1899 wrecks, which included several Norwegian timber ships.

It is unclear how many of the 15 ships have been unearthed by Michael. However, the breathtaking aerial photos clearly show these uncovered historical treasures scattered along Dog Island’s Gulf of Mexico side.

The Crooked River Lighthouse and the Carrabelle History Museum are working with the Florida Department of Historical Resources to create exhibits about these historical shipwrecks. This will allow visitors who cannot make it to Dog Island to see these remarkable relics in person.

We urge visitors of Dog Island to remember that these antiquities are fragile. Feel free to look, but please don’t touch. Do not stand, lean on or remove any part. These artifacts belong to the State of Florida, and FWC will be patrolling Dog Island regularly to ensure their safety.